On Saturday, the Portuguese media were largely quiet on Bruno Fernandes, but Sunday brings a claim from Record over why things have been going slowly.

Manchester United and Tottenham interest is once again pushed for the Sporting player, with Record claiming the former are ‘ahead of their rivals’.

All this has been mentioned before, of course, and the building slant in Portugal now is that neither club are willing to match the €70m which Sporting want.

Bruno’s agent Miguel Pinho travelled to England last week and returned to Portugal with news the Lisbon club didn’t really want to hear: €70m is too much.

Sporting and Bruno’s agent want to accelerate things, and so it seems does Ole Gunnar Solskjaer.

Record claim, and you’d assume they’ve either got this from agent or Sporting sources, the manager has asked those above him to ‘speed up’, as he wants signings in for preseason.

Putting pressure on Ed Woodward would hopefully get him some new Manchester United players in for July 1st. Time is running out.

Pinho will return to London in the coming days to try his best to work things out. He has an office in the city, according to Companies House records.

Tottenham’s interest is entirely dependent on Christian Eriksen, and it would be no surprise if Woodward is trying to work out what will happen with Paul Pogba before going all-in.

Should neither side push enough for Bruno then there’s even the chance of a renewal. 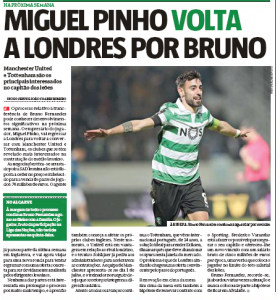 The player’s current contract has a clause which means he must be paid €5m if an offer of €35m or more is rejected.

A potential stance for interested clubs, and this isn’t reported in Portugal, could be to slap in a low official offer, around €50m, and point out to Sporting that if they reject it’ll cost them €5m anyway, so they’d end up with €55m less than they would have done.

There’s no guarantee Bruno will have such a fantastic season in the next campaign, and the Leões obviously know this.