Home Premier League Fresh from Chile on Pellegrini to West Ham: Flying in on Sunday,...
SHARE

Despite currently being in charge of Hebei China Fortune, there is a ‘high probability’ that Manuel Pellegrini will be the next West Ham manager.

That is, at least, what La Tercera are reporting on Friday, as they explain the Chilean manager will be travelling on Sunday to meet with the London club to discuss and negotiate his deal.

The fact he’s currently employed isn’t a problem, as the 64-year-old has a $7m release clause in his contract with the Chinese club, and his contract is due to run out at the end of the year.

Once in London, Pellegrini will stay in England until May 24th before flying to Santiago to ‘make full use of the World Cup break’. 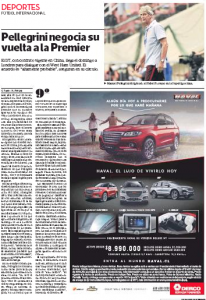 La Tercera claim to have spoken to someone close to the affair, who said: “As long as it isn’t signed, nothing is done. It’s highly probable that he’ll be the new West Ham manager.”

This backs up claims from El Mercurio, who state the manager is currently on the Hammers’ final list of candidates to replace David Moyes (along with Rafael Benitez), who parted ways with the London side after saving the club from a possible relegation and helping them finish 13th with 42 points.

Whether he’ll be presented on Monday like local radio station Pauta claimed on Thursday night remains to be seen, but if the negotiations on Sunday go well, that’s certainly a realistic timeline. 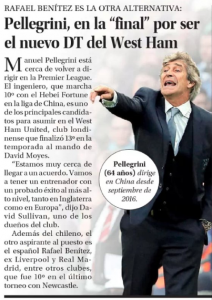 Hebei China Fortune are currently 10th in the Chinese Super League, picking up just 12 points in the first 10 games in which they scored 14 goals and conceded 15.