Home Premier League Arsenal ‘All signs lead to Arsenal’ – Player thought to be close to...
SHARE

Arsenal are pointed out today as one of the possible destinations for Inter Milan player Zinho Vanheusden.

Newspaper Tuttosport brings a story claiming the Nerazzurri could sell him to Standard Liege, who had him on loan this season.

However, the Italian side stopped talks with the Belgians because they have better offers on the table.

Tuttosport claims ‘all signs lead to Arsenal’, even though the Gunners haven’t been heavily linked to the 19-year-old this summer. 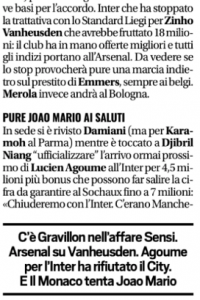 Vanheusden started his career at Standard Liege, having left for Inter Milan at the age of 16. He’s played for the Nerazzurri’s youth ranks, but never had the chance to feature for the first team.

In January 2018, he agreed his return to Standard Liege on a one and a half year loan spell. He’s made 30 appearances for the club this season, being a regular starter both in the Belgian league as in the Europa League.

If Arsenal are really presenting the best offer, the Gunners would probably be paying over €20m for the player.