The Jadon Sancho saga is already a bit of a mess. Borussia Dortmund’s August 10th deadline for the deal to be done is now looking very flexible, and those who had made the transfer sound imminent are back-peddling rapidly.

Tuesday evening saw Manchester United send out a message to their loyal media: The Old Trafford club will walk away from the transfer should Dortmund not come down from their €120m asking price.

Over in Germany, it’s still insisted the asking price is €120m. That’s repeatedly being presented as concrete, with all kinds of dramatic phrases being used to let everyone know it’s €120m or nothing.

Should BVB move away from that figure they’re going to look rather silly.

None of this means that a deal is dead, the general slant remains that a transfer is very possible. Indeed, this week’s edition of SportBild says ‘the signs are goodbye’, despite an agreement with Manchester United not being in sight.

The Premier League club aren’t yet prepared to pay €120m, and negotiations continue via intermediaries. Marco Lichtsteiner, the brother of former Arsenal player Stephan, is involved.

SportBild report he’s worked for Dortmund previously on transfers, such as the Pierre-Emerick Aubameyang and Ousmane Dembele sales. He’s a ‘longstanding partner’ of Emeka Obasi, who has helped manage Sancho’s career. 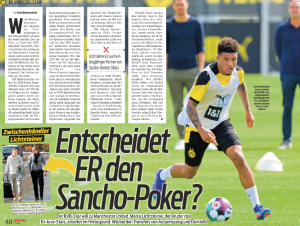 The German magazine states: ‘Most of the time, Lichtsteiner acts as a link between associations and consultants in negotiations, but always stays in the background. Despite his well-known brother, he almost never appears in public. Now Lichtsteiner is supposed to mediate in Sancho-Poker between United and BVB.’

Borussia Dortmund will accept instalments, but it’s increasingly clear they want the €120m guaranteed and not have a chunk of it made up by bonuses.

Should Manchester United accept that, then there’s no barrier to the deal being done.