It was also stressed the Whites and Steven Gerrard’s side are not put off by the left-back’s €7m valuation.

Another Belgian newspaper Het Laatste Nieuws have backed up Het Nieuwsblad’s claim, as they state Marcelo Bielsa’s side ‘show interest’ in the 26-year-old.

Gent star Jonathan David is attracting interest from Lille and the Canadian could be allowed to leave the club this summer.

According to HLN, the Jupiler Pro League side were expecting there would be no exits, after sanctioning David’s sale. However, Leeds United could change that stance. 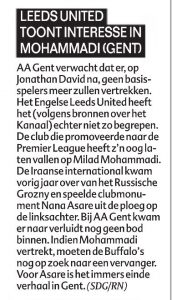 It’s claimed Leeds have set their sights on the Iran international, who joined Gent from Russian side Akhmat Grozny last summer.

Despite the claims of the English club’s interest in the defender, Gent have not received any offers for him.

HLN add the Belgian side will have to quickly bring in a replacement if Mohammadi decides to leave his current employer.