The Sporting midfielder has been linked with a move to Manchester United for around three months, and there’s been endless claims about a potential transfer.

Figures have been reported of potential offers, but the general consensus is that whilst the Red Devils may have spoken about formulating offers, no official bid has yet been received by the Lisbon club.

After claiming Jorge Mendes had been pulled in to help Sporting sell the player, they now say he’s been pushed out of negotiations. That’s partly because the club feel they can negotiate the deal themselves, and partly because they think he’s too concentrated on a Joao Felix transfer to give the Bruno situation enough attention.

Earlier on in this saga, it was claimed Mendes had met Manchester City for Bruno negotiations, but a source close to the situation informed Sport Witness that wasn’t the case.

There’s a good possibility that a false claim has been made again, and Mendes hasn’t been involved at all. 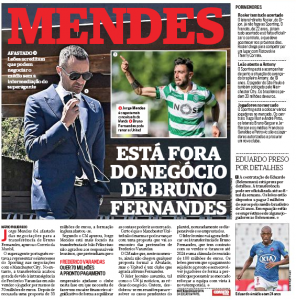 Back to Manchester United.

Correio de Manha say a move to Old Trafford ‘appeals’ to the player, and the Premier League club ‘can advance’ to make the signing.

Of course they can, the issue is that so far they haven’t.