With no renewal in sight, Georginio Wijnaldum will leave Liverpool as a free agent when his contract expires on June 30th.

Having been linked with a move to Barcelona for close to a year now, the La Liga side are still  believed to be interested in the Reds midfielder.

Other clubs have also entered the mix for the Dutchman and among them are Paris Saint-Germain, according to L’Equipe on Thursday.

It’s claimed the Ligue 1 side’s midfield is ‘deprived’ in the absence of Marco Verratti, who is sidelined with a knee injury.

The newspaper suggests PSG’s ‘creative deficiency is far too significant for the very high level’.

The situation has made the Paris club retain Idrissa Gueye, months after making him available in the winter market. 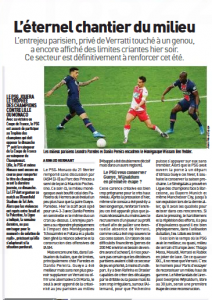 Mauricio Pochettino’s side will look to ‘reconstruct the midfield’ in the upcoming window.

As a part of PSG’s ‘reconstruction’, the French club want to take the ‘first step’ by signing Jürgen Klopp’s man.

The Liverpool player will be available on a free transfer this summer and his potential arrival would help PSG in satisfying their economic conditions and sporting needs.