Max Meyer is under pressure to perform at the UEFA European Under-21 Championship in Poland. Not only does he know he’s pretty much in the shop window, having refused to renew his 2018-ending Schalke contact, but his manager Stefan Kuntz has told him to make a point.

Meyer has been much linked with Tottenham, more so than any other club, and Mauricio Pochettino pushed a move for the player last summer but was met with too high a price from Schalke, and Moussa Sissoko was signed for a similar position.

Meyer, like most of the squad, had a miserable season for Schalke, and is obviously less than content at the club. In a SportBild feature, Kuntz is quoted encouraging the 21 year old to show he’s better than last season suggests: “I insisted that he would show why he is dissatisfied with his situation at Schalke.”

Schalke were a mess last season, which isn’t the fault of Meyer, and Tottenham shouldn’t drop their interest based on the last campaign. As far as SportBild are considered, they haven’t, and it’s reported a Spurs official is at the Euro U21s, keeping a close eye on Meyer. 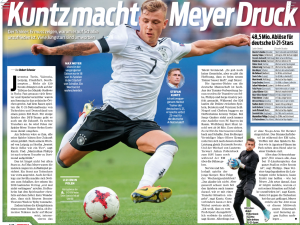 The player’s agent Thorsten Weck is also there, and there’s other interest too. Meyer could probably be signed for under €20m, maybe a lot less, which is a huge drop.

It doesn’t sound like too bad a gamble for Tottenham.