Yesterday started the story that Juventus could turn to Manchester United’s Matteo Darmian were Dani Alves to complete his move to their rivals Manchester City, and it all appears to have escalated quickly.

The Italian defender had a very hit and miss first season under José Mourinho, spending most of it out of position at left-back, supplanting a seemingly under fire Luke Shaw. 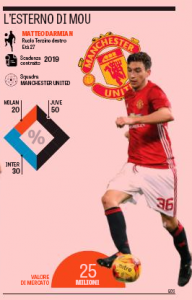 Making just 18 league appearances last year, there are suggestions Darmian could be wanting a return home, as put forward by Gazzetta dello Sport on Wednesday.

Looking at some of the potential transfers that could take place in Serie A this summer, the Italian newspaper have a percentage lozenge breaking down the Manchester United defender’s potential destinations, and none of them are Old Trafford.

Unlike a neighbouring breakdown that suggests there’s a 30% chance that Keita Baldé could stay at Lazio, Matteo Darmian’s consists of Juventus, Inter and AC Milan.

The Serie A champions lead the percentage war with 50%, while Inter, to whom Darmian was heavily linked in January, are at 30%, with neighbouring AC Milan completing the total with 20%.

In the article’s text, Gazzetta explain that while José Mourinho wouldn’t be unhappy to have the Italian defender around next season, they hint he wouldn’t stand in his way if he wanted to move back to his home country.

As for the price, there’s a bit of confusion, stating €25m in the infographic, while the text version says his value is around €15m.

Let’s meet them in the middle and say €20m, then. That sounds about right.