Mundo Deportivo claims Ernesto Valverde is not happy with the left-back situation at Barcelona as Jordi Alba is the only recognised senior option available at the club.

It’s claimed the former Athletic Club Bilbao manager is looking for reinforcements in the fullback position and the Catalan newspaper mentions Arsenal’s Nacho Monreal is a player who fits the profile.

Earlier in July, we relayed news from Spain that Real Sociedad had contacted the 32-year-old’s agent to see if they can sign the Gunners player, whose contract at the Emirates expires at the end of the season.

The report says the former Malaga man’s desire to leave the north London club in the summer, thinking he’d lack games this season, suffered a blow after Sead Kolasinac picked up an injury. 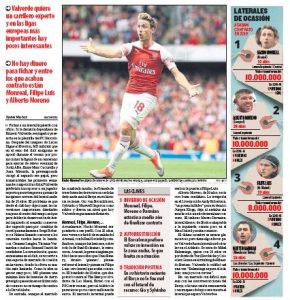 door for the Brazilian to make a switch to Arsenal, which in return could help Monreal move to Barcelona, either in the same window or next summer.