Mariano’s return to Real Madrid forced Lyon to bring in a replacement and they signed Moussa Dembele from Celtic on the final day of the Ligue 1 transfer window.

The 22-year-old’s decision to leave Brendan Rodgers’ side did not go down well with the Bhoys as they failed to secure a replacement for the attacker.

Tuesday’s edition of L’Equipe looks at his situation at Groupama Stadium and the French newspaper talks about various ways in which Bruno Genesio could accommodate the player.

In the same story, there is also comments from Seko Fofana, who played alongside Les Gones’ new addition, while the two were at Fulham. The Ivory Coast midfielder hailed his former teammate as a “complete” player and also stressed the Scottish Premiership club should have earned more from his sale, which some Celtic fans may agree with.

“I am surprised that clubs didn’t come to take him [Dembele] before. I was told that he cost Lyon was €20m [actual price is €22m], but Moussa is worth at least double.

“He is a complete attacker, who can use his head, left foot, right foot and also defend. His delivery, he’s clean technically, he is a big, strong guy…” 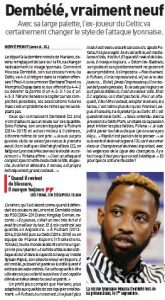 When Fofana was at Lorient’s academy, he came up against Dembele, who was representing Paris Saint-Germain’s academy. He said, “In the youth, he was a tough opponent and had finished as the top scorer. Dembele confirmed his qualities at Fulham and Celtic.”

Rodgers would have preferred €40m, but €22m isn’t such a terrible deal, more so if there’s a sell on percentage.