When Liverpool signed Luis Alberto from Sevilla back in 2013 for a fee of around £7m, there was hope he would become a first-team player fairly swiftly.

A 20-year-old at the time, the Spaniard never managed to fully break through at Anfield, managing just 12 appearances for the first-team during his three years at the club.

Instead of rotting in the reserves, however, he was sent on various loans, first Málaga before a stint at Deportivo La Coruña, which caught the eye of Lazio in Serie A.

A £3.6m transfer ensued, and the late bloomer slowly but surely became an assist machine at the Italian side, where he is currently a key player in their attempts to qualify for the Champions League.

With five goals and 15 assists in 29 league appearances this year, Lazio know they have a star on their hands, which is why they are keen to tie him down for the foreseeable future as they plan to get his best years from him.

But why didn’t it work at Liverpool? That’s a question France Football asked the midfielder this week.

He replied: “I think it’s a little bit my fault. I didn’t do everything necessary to be at my level in terms of work and focus. What I should have done at 20, I was only able to do it at 25. It’s a shame, I lost a few years. I’m 27 now. I’m trying to make the most of it and I think there’s a lot of time left to continue to enjoy myself. 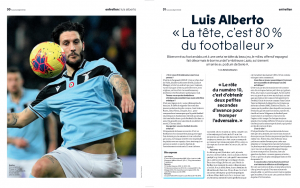 “I left Spain quickly, and especially a context, at Barcelona’s B team (where he’d spent a year on loan from Sevilla). At Liverpool, I adapted well, but it happened bit by bit. I finished by reaching a good level, with the possibility of playing a little bit. Unfortunately, we didn’t get the chance to win the Premier League”.

This was in 2013-14, when the Spaniard made all of his appearances for Liverpool, nine of which came in the Premier League.

He was on the bench when Steven Gerrard slipped to let Demba Ba through on goal back on April 27th of that miserable year for Reds fans.

It’s a story of what could have been for both Liverpool and Luis Alberto, but it doesn’t appear to be a move the player regrets.

He simply feels he could, and should, have done better.