A near regular during the opening 10 games of Anderlecht’s season under Vincent Kompany, Philippe Sandler suffered the misfortune of injuring his knee, which then needed surgery.

The 23-year-old was brought in on loan from Manchester City by the former defender, and the plan was to give him regular game time in a big team.

Unfortunately, the injury happened, and the Dutch defender spent the rest of the season recovering, but he should be ready to return for next season.

Where he plays, however, remains a mystery for the time being, as Sandler is currently back at Manchester City since his loan at Anderlecht ended on June 30th.

However, the Belgian side, according to La Capitale, are keen to bring him back for another stint, hopefully one that will see him play more than nine Jupiler Pro League games. 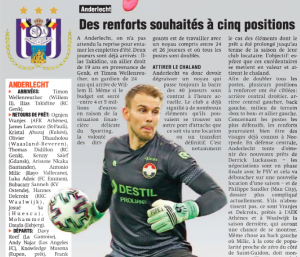 The local newspaper state Anderlecht are ‘trying to get new loans for Derrick Luckassen and Philippe Sandler’, with the latter described as ‘more complicated’ than the one for the PSV player.

Should those not materialise, then Hannes Delcroix and Ognjen Vranjes will be given a chance to prove themselves.

Why a deal for Sandler is deemed complicated isn’t said, but it could be Guardiola has plans for him going forward, perhaps wary of facing similar problems in the centre of defence to the ones he encountered following Aymeric Laporte’s injury.

“I wanted to be sure to play” – Prolific forward explains...