Regardless of what Ole Gunnar Solskjaer says about Paul Pogba’s future, stories are going to be written about the French midfielder.

Two clubs tend to reappear, as Real Madrid (who have Zinédine Zidane as their manager) and Juventus (the Manchester United midfielder’s former club) consider strengthening their midfield, although they are aware of the price it would cost.

Take Tuttosport on Thursday (screenshot below), for example, as they push the possibility of Pogba returning to Italy in an article looking at how Juventus are looking for a new man in his role, and how he would be perfect for Maurizio Sarri.

If anything, they simply echoing what Gazzetta dello Sport said earlier this week, even if Sandro Tonali would be more affordable.

But, Calciomercato, although agreeing that Pogba remains the ‘priority’, explain the Brescia midfielder hasn’t been forgotten by Juventus.

Not only that, but they claim that Manchester United are among the competition for Tonali, with Brescia receiving ‘several proposals’, explaining the Old Trafford based side are one of those who have ‘moved’ for him. 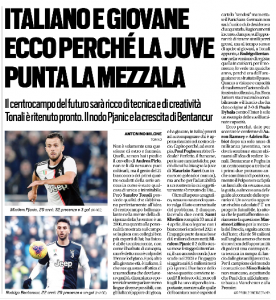 It’s all a bit of a mess, but the bottom line appears to be that Juventus would ideally like Pogba, but value the young Italy international as well.

As for Manchester United, they know they will have to strengthen their midfield at some point, even if Nemanja Matić appears to be staying for an extra year, so keeping an eye on Tonali makes sense.

Everton man has been ‘proposed’ to another club – Sounds like an agent move, Toffees would resist

Everton man has been ‘proposed’ to another club – Sounds like...

“We couldn’t find an agreement” – Agent on trying to snatch...

Club will look to sign Fulham player if club fail with...