Starting just 15 games this season for Tottenham, it’s fair to say Serge Aurier’s year could have gone a bit better as Mauricio Pochettino continues to trust Kieran Trippier over the Ivorian.

Contracted to Spurs until 2022, the 26-year-old could have an option to leave in the summer, as Corriere dello Sport believe Inter are interested in his services.

Their need for a right-back since selling Joao Cancelo to Juventus has been apparent, loaning both Sime Vrsaljko and Cédric Soares from Atlético Madrid and Southampton respectively as stop gaps for the current campaign.

There are still question marks regarding the Croatian’s future (it’s been made clear the Portuguese will be returning to St Mary’s), but if the option to buy isn’t triggered (he’s currently out of action following knee surgery), they will need to invest. 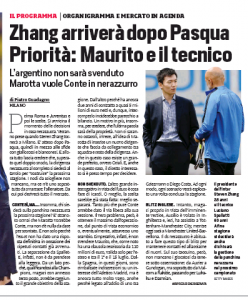 This is where Aurier comes in, as the aforementioned Italian newspaper state the right-back was one of the players being monitored by Piero Ausilio, Inter’s director of football, who travelled to Tottenham’s new stadium to watch the London side’s Champions League clash against Manchester City on Tuesday.

This trip has already led to several rumours.

Having spent £22.5m on the Ivory Coast international in the first place, Spurs will likely want most of that back if any transfer were to take place.

It will be interesting to see if Inter are willing to go that high, or if they’d rather spend less money on a potentially safer bet like Matteo Darmian, who is desperate for a return to his home country.