Yesterday we covered reports from Turkey that the Istanbul club are interested in Villa’s January signing and today Fotomac have backed up these reports.

Gala were linked with a move to Samatta prior to his Villa transfer, and it’s reported again that the club’s manager Fatih Terim is keeping tabs on the Tanzanian striker.

It’s stated Galatasaray will make a loan offer for the 27 year old if Aston Villa drop down to the Championship. Terim is said to be looking to bolster his attacking options next season, with Radamel Falcao turning 35 years old next year. 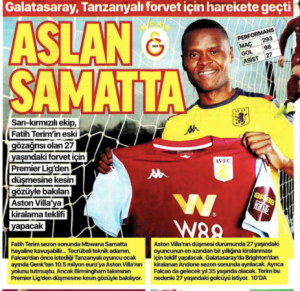 Aston Villa paid €10.5m for Samatta during the last window after Wesley’s injury, and the former Genk player has made six appearances for the Premier League club, scoring two goals.

His contract with the club will expire at the end of June 2024.