Besides Italian journalist Alfredo Pedulla, newspaper Record now writes that the Benfica youngster is on his way to the Premier League side.

The newspaper claims that Djú had a contract with Benfica until 2021, but is now flying to London today to join the Hammers’ U23 squad on a permanent transfer.

Although Record doesn’t say how much West Ham are paying for the transfer, it’s claimed that the Eagles will get 50% of a future move. 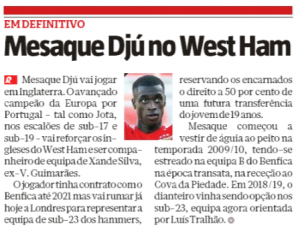 Despite being born in Guinea-Bissau, Djú has represented Portugal’s youth teams for a few years now, mostly playing on their right wing.

Record points out that Djú is joining Xande Silva, who left Vitória Guimarães in a €1.5m deal last summer and is now part of West Ham’s U23 squad as well. The striker already had three chances to play for the Hammers’ first team so far.