It’s not every day that the Italian press take some time out of their busy schedule to correct the English press, but that’s what Leggo have done on Monday.

Not only did they point out something wasn’t quite right, they did so by downplaying the amount West Ham are reportedly offering Edin Dzeko to move to London Stadium next season.

The Hammers’ interest in the Bosnian is nothing new, and a report from Calciomercato over the weekend stated he had said ‘yes’ to their offer, which was a two-year deal with the same wages he is currently on at Roma.

However, the Daily Express ran away with the story on Sunday, claiming West Ham were ready to offer Dzeko £165k/week over the next two seasons.

Leggo explain that isn’t quite correct, explaining the wage is €5m/year, which equates to around £83k/week. 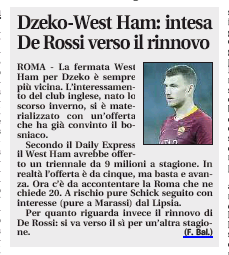 They go on to say that this is ‘more than enough’ for the former Manchester City striker, who is ‘convinced’ by the offer and the move.

The last hurdle, corroborating Calciomercato’s story over the weekend, is ‘pleasing’ Roma with the right transfer offer, as the Serie A side want €20m for the 33-year-old.

It’s a bit much for a veteran forward with just over a year left on his deal, and the likelihood is the Italians will lower their demands over the summer.

They’re just playing hard to get for the time being.