Late last week, the general consensus in the Italian media was that Maurizio Sarri would be allowed to leave his role as Chelsea manager on Monday.

As often happens in these cases, there have been a few hold ups, notably the Blues’ struggle to find a suitable replacement for the former Napoli man (we reached Rafa Benitez levels on Monday), who is widely expected to take over at Juventus if he is to exit Stamford Bridge.

The Serie A champions are patiently waiting for Sarri, and a push was made on Tuesday evening, as Fali Ramadani, the famous intermediary, met with Chelsea in order to define an agreement suitable for all parties.

As Gazzetta dello Sport explain, it isn’t ‘simple’, but they expect an answer to come from Roman Abramovich in the ‘next few hours’. 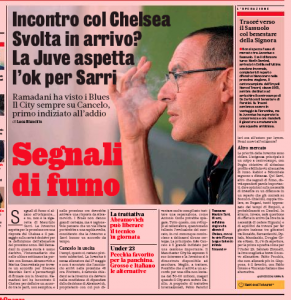 There are no ‘great certainties’ the Russian oligarch will let Sarri go, but if he does, there should be little delay between Chelsea announcing their manager’s release and Juventus welcoming him as their replacement for Max Allegri.

The Italians and the 60-year-old reached an agreement a while ago, meaning all that’s needed is a signature to make the whole thing official.