Santi Cazorla’s struggles with injury are well documented and that’s been the case for some years, but an interview he did with Marca last year brought everything more into focus.

The then Arsenal player gave an open interview to the Spanish newspaper, and showed where he’d had skin grafted from his arm, including a section of a tattoo, to try and help the area around his Achilles heal.

Cazorla had been told to be satisfied if he could walk normally again, but that wasn’t enough for the footballer. Many of those who read the interview and saw the images wished him the best of luck, but surely doubted if he’d reach the aim of a return at the top level.

Already in his thirties, it all seemed so difficult.

But, after leaving Arsenal in the summer, Cazorla went training with Villarreal and they liked what they saw. So much so, he’s now contracted until the end of the season, taking him to 34 years of age, and is excelling.

This week Marca named him in their eleven best players from the last round of La Liga. 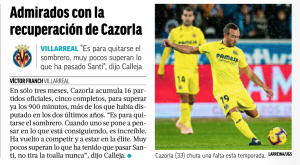 And today they have some words from his manager Javier Calleja: “It’s something to take off your hat to… He’s incredible. He has returned to compete and to be in the elite. Very few surpass what Santi had to go through, he never throws in the towel.”

Cazorla has amassed 827 minutes so far this season over La Liga and Europa League, and made four assists.