Netherlands and Ajax defender Matthijs de Ligt’s form for club and country has seen him draw attention from top clubs across Europe.

One of the clubs after his services is Barcelona and journalist Oriol Domenech has provided an update on ‘El Club de la Mitjanit’, a program on Catalunya Radio

He claims the La Liga winners’ technical secretary, Eric Abidal, travelled to Amsterdam and met the 19-year-old and explained to him their project, as the Blaugrana have already started their ‘strategy of seduction’.

Ernesto Valverde’s side now wants to ‘convince’ the Dutchman that there is no other club better than Barca for him, where he will also get to play alongside Lionel Messi.

Domenech mentions that Abidal also held talks with the centre-back’s compatriot and teammate Frenkie de Jong, but over the phone.

Any approach from the Spanish champions for the defender and the midfielder will not be easy because they will face competition from Juventus, Manchester City, Real Madrid and Paris Saint-Germain.

The Catalan newspaper says Ajax would wish to raise funds of €140m (€75m for De Ligt and €65m for De Jong) from the sale of their two stars after this season. 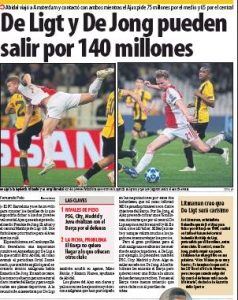 It’s also mentioned that Barca may be unwilling to meet the salary demands of the two players as they have ‘less financial muscle’ than the clubs ‘backed by oil money’.