After sacking Marco Silva this week, Everton’s hunt for their next manager is now on, and there have already been numerous names linked.

One of those is Napoli manager Carlo Ancelotti, with several reports in England suggesting the Italian boss is high on Everton’s wish list.

Securing Ancelotti would be a significant coup for the Blues, primarily because he is a big name manager who has managed the biggest clubs in the world, but also because he’s currently in charge of Napoli.

However, the latter may not be the case by the middle of next week. Gazzetta Dello Sport that Ancelotti is seemingly on borrowed time at the club and his fate could be sealed by next week.

The Napoli boss has found himself under pressure at the club, with them currently seventh in the table and 18 points behind leader Inter Milan.

The whole club is something of a mess, and Ancelotti has been receiving plenty of criticism, particularly from his players, who have questioned his training and tactics.

Indeed, Gazzetta explain that Ancelotti is being ‘held hostage’ by a group of players who have revolted against him, leaving him a ‘prisoner’ in the dressing room.

He is now ‘one step away’ from being sacked, and failure to beat Udinese on Saturday could seal his fate.

However, president Aurelio De Laurentiis will probably wait to see if Napoli qualify from the group stages in the Champions League on Wednesday.

If they don’t, it’s incredibly likely that Ancelotti will be sacked, with Gennaro Gattuso waiting in the wings to take over.

Now to be clear, Gazzetta make no mention of Everton or their apparent interest, but if it is real, then this situation will be very interesting to Farhad Moshiri and the Everton board.

If Ancelotti is as high up their list as it’s been suggested, then they would do well to bide their time and see how the situation at Napoli develops before making their move. 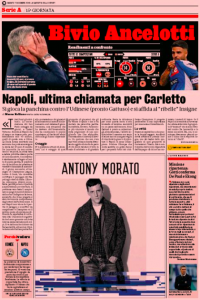 It could save them the effort they’ll have to spend on negotiating with Napoli, and the compensation the Serie A side would demand as well.

Conversely, it could also make them think twice about appointing Ancelotti and looking elsewhere.

Either way, showing a bit of patience could end up benefitting Everton in the long run.