It’s fair to say the Dutch media are angry about Saturday’s injury to Virgil van Dijk. As well as being unable to follow his achievements for Liverpool, football followers in the Netherlands will now have to do without the defender for Nations League matches and potentially Euro 2020/21.

De Telegraaf columnist Valentijn Driessen has described Jordan Pickford’s tackle on Van Dijk as an ‘insane action’, and it’s suggested there’s a wider problem with officiating and the use of VAR in English football, although an admission things aren’t perfect in the Dutch game either.

Mario van der Ende, a former referee, has been given a big chunk of the newspaper’s sport section to voice his annoyance over what happened as Everton drew 2-2 with Liverpool at the weekend.

Clearly angry, he’s quoted as saying: “I really had the feeling that Pickford was thinking: him or me and hoped that the ball is in between. The foul, for which Everton attacker Richarlison was rightly sent away in the second half, was a real leg breaker because of the straight leg.”

Van der Ende believes Pickford should have been given a red card and he doesn’t understand why VAR didn’t make this happen: “Incomprehensible. Really, I have no idea. It must be that he supported the referee’s decision that it was a duel for the ball. Here, however, the VAR should have taken its responsibility. And he had plenty of time for that, because the game was halted for a while due to Van Dijk’s injury.” 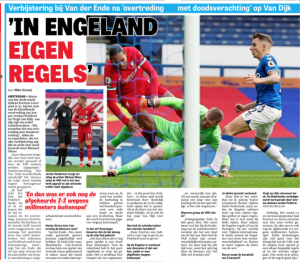 excellently during Italy-Netherlands, but as soon as the English referees are back on their island, their own rules apply. But it’s not like driving on the left. There, the English rules deviate from the European rules, but not in football. During international duels, the English take much more responsibility and whistle more according to the letter of the law.”

Van der Ende saying football has its “own rules in England” is used as De Telegraaf’s headline, and shows just how annoyed people have been left after Van Dijk picked up a long term injury.