Philippe Coutinho’s move to Barcelona in the January 2018 transfer window came after months of battle between Liverpool and the La Liga side.

Coutinho had wanted to join the Blaugrana earlier, but the Reds put their foot down and certainly weren’t prepared to let Barcelona bully them over a transfer fee.

The Catalan media were furious with Liverpool for having the temerity to demand a huge amount, and there were insults sent towards the club and manager Jurgen Klopp.

In the end, Barcelona agreed a deal that was worth €120m plus a further €40m in bonuses. Almost immediately, it seemed to become apparent to Barca that they’d overpaid and that has been the shadow over Coutinho’s career since.

Wednesday’s edition of Sport calls the transfer the ‘most ruinous business in history’ for Barcelona. As part of the bonuses, another €20m is owed to Liverpool should Coutinho make 100 appearances for his club, which would be likely if they actually gave him a decent run and the chance to succeed. 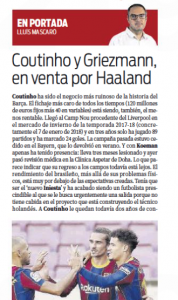 As it stands, and it’s felt this way for a while, Barcelona don’t appear to even want Coutinho to succeed, preferring to just see the back of the Brazilian.

Sport state his value is now just €40m, and that he’s for sale.