Ruben Neves to Liverpool is starting to be one of those stories that grows for little reason other than bouncing back between the English and the Portuguese media.

As covered by us on Wednesday, there’s been one story (and many spinoffs) from each country encouraging the transfer. One of them was Stan Collymore saying the midfielder would be ready to play for the Reds. His opinion got big coverage in Portugal.

Then Brazilian journalist Marcus Alves, who lives in Portugal, claimed Neves is in negotiations to join Liverpool, while Anderson Talisca would arrive to replace him at Wolves.

Today, newspaper O Jogo brings a big story about Neves on their back page, claiming Neves would be on Liverpool’s radar for next season. 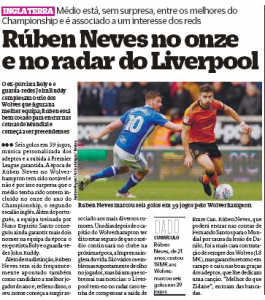 They say these claims come ‘from the English press’, although, as we’ve just explained, they started in Portugal as well.

The story also highlights the face that Neves is in the Championship’s best eleven this season, and could be fighting for the prize of best player.

But regarding a Liverpool move, there’s nothing else they can say. It’s clear the Northern Portuguese media would be proud if Neves gets such a move, but all they’re doing here is making up that the story is big in England.

This will then filter back to England and before we all know it, Ruben Neves to Liverpool is *a thing*.