Neymar and Chelsea links won’t go away, and that pattern is very unlikely to change ahead of the summer transfer window. The Brazilian star has been linked with a move to Chelsea since before he arrived at Barcelona, and Roman Abramovich has been reportedly keen for years.

In March the rumours were used to try and drive a wedge between Antonio Conte and Abramovich, when it was claimed Neymar had been offered to the Italian manager by Chelsea’s owner, but Conte was left unimpressed.

On the back page of Saturday’s Mundo Deportivo, Abramovich and Neymar are paired again. The Chelsea owner is said to be seeking a personal meeting with the Barcelona player’s father, to convince him a move to Chelsea is what he should be pushing for. 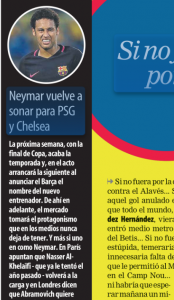 As usual, PSG are also linked with Neymar, and, as usual, it all seems like speculation.

Neymar is very happy where he is, is increasingly important at Barcelona, and there doesn’t seem a reason to move. Not this summer anyway.

There’s likely to be one thing on Neymar’s mind over the next year, and it’s unlikely to be Chelsea. With the World Cup 2018 appearing on the horizon, Neymar will already be hoping he can push Brazil to the title and a change of clubs in the lead up isn’t the most sensible plan.