Everton and Tottenham have been named as potential destinations for Roma attacker Cengiz Ünder.

Roma are looking to add to their squad in the January transfer market but will first have to move players on, with Ünder among them.

The right sided attacker, who can also play on the left or through the middle, has managed just one goal in ten appearances for Roma this season, while a return from a hamstring injury suffered earlier in the campaign has been slow.

He has managed just five minutes of football in his last three games and currently finds himself down the pecking order at the club.

They would happily move him on in January, and according to Il Mattino, sporting director Gianluca Petrachi is working to that end.

He would ‘place’ Ünder at either Everton or Tottenham, while there is also interest from Bayern Munich in Germany.

The newspaper does not state if any of these clubs are even interested in Ünder, just that these are the three locations Roma would look to send him to.

Calciomercato report that he is no longer ‘non-transferable’, though, with Roma having put a €35-40m price tag on his head. 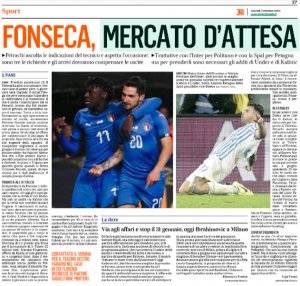 That’s a high price, particularly for the likes of Everton, who have more pressing needs for the winter window.

Indeed, the website states that no offers have arrived in Roma at the moment, suggesting a move to England isn’t likely at this early point in January.