Celtic once again continued their ambitious scouting of Benfica on Saturday. The Lisbon club tied up their 36th Portuguese league title with a 5-0 victory over Vitoria Guimaraes.

In what quickly turned into a party atmosphere, Benfica’s match became something of a procession, with several players showing why Benfica have been so dominant in Portuguese football in recent years.

A Bola report that a Celtic official was spotted at the match, and the Scottish Premiership champions have increased their Portuguese scouting under Brendan Rodgers. The club they watch the most is easily Benfica, but the talents on display don’t come cheap.

Celtic have previously been linked with Mikael Lustig’s Sweden teammate Victor Lindelof, but that move isn’t going to happen. Lindelof recently signed a new contract with a €60m buyout clause, and even before that he was already out of Celtic’s price range.

It’s difficult to find players within Celtic’s price range at Benfica, and perhaps an associate of Rodgers is using the club’s scouting pass to watch some games for free. At the same time, the opposition can be watched against the stiffest competition they’ll face of the 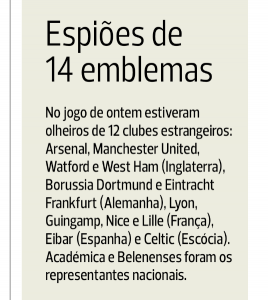 For Vitoria Guimaraes, there’s more realistic targets, although not as ambitious, with Peruvian Paulo Hurtado, owned by Reading, linked with moves to West Ham and Bournemouth recently. He’s scored 7 goals this season and plays off the front striker.

Moussa Marega has been linked with Celtic previously. The 26 year old, on loan from Porto, is flexible across the frontline and has 14 goals and six assists so far this season. That’s an impressive return given he normally plays off the right.

A Mali international, Marega was born in France, so there’s no worries about a work permit.

Those two look the likeliest possibilities.