Four days ago we covered claims from Sport that Barcelona are ahead of English competition for Lautaro Martinez, because the Inter Milan player has his head set on moving to the Camp Nou if he’s to go anywhere this summer.

Today they continue with similar claims, and focus on Martinez refusing to renew his contract with the Serie A club. Given this refusal, which is partly because the financials aren’t good enough, Inter are becoming increasingly clear that a sale is a likely outcome this summer.

Chelsea are again brought into the picture, with it being reported they, along with Manchester City, are willing to pay Martinez more than €10m net per year.

That, almost double what Inter are proposing, is something the Milan club don’t want to match, and couldn’t match even if they had the desire to do so. Barcelona don’t want to get into a wages auction at such figures either, although it’s thought they can win the battle because they have the will of the player on their side. 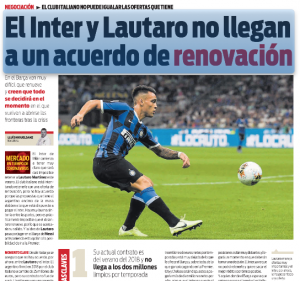 Sport’s suggestion is that Martinez will tell Inter not to speak Chelsea or anyone else other than Barcelona, and the Catalan hope is that would allow the Blaugrana to push ahead for a deal.