Wanting/needing a new winger in January, Arsenal set their sights on a former Manchester United target in Ivan Perisic.

The Croatia international was open to the move, making his intentions rather clear, but the Gunners’ inability to please Inter with their offers led to very little happening.

Tottenham also joined the party, but only after the January transfer window shut, as Mauricio Pochettino looks to add a bit more width to his game ahead of the upcoming campaign in their new stadium.

Fast forward two months or so, and Corriere dello Sport believe Arsenal and Spurs are still the two teams ‘potentially’ interested in Perisic. 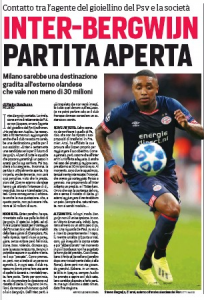 The forward even swapped agencies, hiring Doyen Sports, in order to get his move away from Inter to the Premier League, where he would like to play before it’s too late.

This information comes as part of an article surrounding the Serie A club’s interest in Steven Bergwijn, and with the Dutchman costing €30m+, decisions need to be made.

Inter’s reluctance to spend €34m on Baldé Keita due to a rather tepid season on loan from Monaco means the money could be spent on Bergwijn.

If they do, however, then Perisic would need to be sold to bring in the funds required.

Another scenario would be to let Keita go and sell the Croatian, and if that were to happen, then they would need to bolster even further, meaning Arsenal or Tottenham money would be very, very welcome.