Tuttosport throw a curveball into Ivan Perisic’s situation on Tuesday by reporting the player looks set to sign for Tottenham in the summer window, if everything falls into place.

It’s claimed that during the January transfer window, Perisic’s preference was actually to move to Tottenham ahead of Arsenal, but Mauricio Pochettino’s side didn’t really push with their effort and that’s why it wasn’t the headline story.

Things are predicted to be different for the summer, with Perisic ‘betrothed’ to Spurs for what is described as a summer wedding. The bells will ring and the Croatian find himself married to the London club. 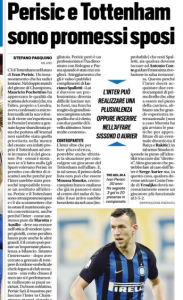 He has a desire to play in the Premier League, and Tottenham is surprisingly the club now at the forefront.

A transfer is likely to be at a lower price than previously reported and there’s a chance for Inter Milan to get a Tottenham player in the deal, with both Moussa Sissoko and Serge Aurier named as possibilities.

Pochettino signing a 30 year old, who would arrive as a big signing on matching wages, doesn’t sound like something Tottenham would normally do… but Tuttosport are adamant, and if players can be used in the deal that may make what initially seems unlikely more possible.