RTL journalist Thomas Wagner has spoken to Turkish newspaper Aksam about Max Kruse choosing to move to Fenerbahce despite attention from Liverpool.

Last week the Turkish side confirmed they’d reached an agreement with the German attacker and he will commit himself to the Yellow Canaries for the next three seasons.

Speaking about Kruse, Wagner said Liverpool made a proposal to the former Werder Bremen player: “I know Liverpool made an offer to him. At first, I thought that a move to Fenerbahce is an unlikely one. But he choose Fenerbahce over Liverpool. I think he will make a lot of money in Turkey and also he will be the centre of attention.”

The 31 year old linked has been linked with move to Liverpool this summer after becoming a free agent. It was reported Jurgen Klopp wanted to bring in his compatriot to improve his attacking options, especially given Daniel Sturridge has now left Anfield.

Fener have also been in the market for a No.9 in this window following the departures of Roberto Soldado and Islam Slimani. The Super Lig side have also been linked with Tottenham’s Vincent Janssen. 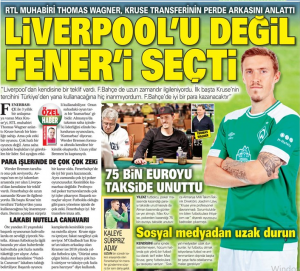 Kruse will reportedly receive a €2.5m signing on fee from Fenerbahce and will earn a total of €7.5m in wages in his next three seasons in Turkey.

Some others in the German media have suggested Liverpool claims have been overstated.

Player ‘says yes’ to joining Everton – Offer now made for...