Preseason is a funny time in football. It’s the part of the campaign where expectations are sky high and hope abounds that the upcoming campaign will be a successful one.

Not at Reading, though. After narrowly avoiding relegation last season, the Royals were hoping for something a bit more relaxing next season.

In fact, they were probably thinking about moving up the table and potentially sneaking a playoff place.

It seems that’s not going to happen, at least as far as manager Jose Gomes is concerned. The Portuguese boss took over the club last season with them fighting relegation and helped to turn around their form and secure a 20th placed finish.

The hope was that with a preseason and some rebuilding he’d better that considerably this year but he’s poured cold water on any hopes of that.

Speaking to O Jogo back in Portugal, the Reading boss has not hesitated to air his frustrations and temper any expectations about his side for the forthcoming campaign.

“The goal would be a promotion, but in this scenario it would not be realistic to put that goal,” he said.

“If they give me the players I asked for, it will be to fight for the climb, but if they do not they will not.

“We are training with 14 U23 players because of problems with financial fair play. However, we have already lifted the embargo, even though we cannot spend much money.

“Let’s see now if they give me the players that fit into the way I want to play and that will the success of this season will depend on that.”

While seemingly tempering expectations, that’s also a very clear message from the manager to those above him. 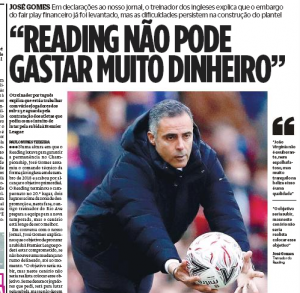 It’s not quite an ultimatum but certainly a demand that those in charge at Reading give him the support he needs, otherwise next season won’t be a happy one.

We’ve seen these sorts of demands from managers before and usually, they don’t work in their favour. It’ll be interesting to see how it plays out for Gomes.