There wasn’t anything in Saturday’s Portuguese sport newspapers on Bruno Fernandes.

The Lisbon club had played a friendly, which Bruno had naturally scored in, and so the concentration was on that.

Sunday’s edition of O Jogo explains Sporting manager Marcel Keizer is already preparing for the player’s exit. It’s said his move to Manchester United is ‘probable’, and therefore Keizer will be looking to change his formation and then practice this during preseason.

Such an important player for Keizer’s Sporting team, it makes sense for the club to move on to other options if they feel his move to Manchester United is now closing in. 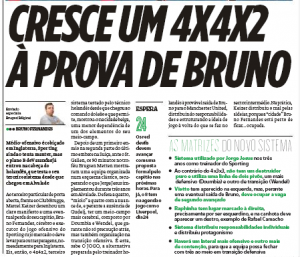 The Premier League club, just like Bruno, have been enjoying a good preseason so far, and finally getting this signing over the line would be a further boost ahead of the new campaign.