Everton have been linked with other forwards in recent weeks, including Juventus duo Mario Mandzukic and Moise Kean. The Merseyside club are reportedly also interested in Lille’s Rafael Leao.

It’s reported Galatasaray manager Fatih Terim is keen to add a striker to his squad this summer, with the Super Lig club’s current senior attackers Mbaye Diagne and Kostas Mitroglou linked with a move away.

Gala will be competing in next season’s Champions League groups stages and are looking to strengthen their squad in this window. 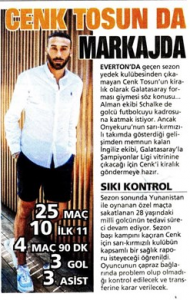 Terim knows Tosun well from his time as national team manager and Sabah say the Turkish champions are battling with Schalke for the signature of the 28 year old.

Tosun still has three years remaining on his current Everton deal but it seems he’s not an integral part of Marco Silva’s plans.