Carlos ‘Gullit’ Peña’s transfer to Rangers is a huge thing in the Mexican football media.

After claims of a deal, journalist Franisco Montes from Fox Sports has a few more details, saying the player only needs to sign the contract for the transfer to be made official.

He claims that Rangers are paying $4m (£3.12m) for the midfielder, on the recommendation of Pedro Caixinha, and Fox Sports says that Gullit should be presented at Ibrox on June 13th.

Mexican newspaper Record also gives much attention to the transfer, with two different stories about it.

The first one is a touching column written by Luis Garcia, in which he tells Peña this is the best chance the player will have to overcome the many adversities in his career.

The column mentions the irony that such a smart manager as Pedro Caixinha is now the one giving an opportunity for Peña to leave his behavioural issues in the past. 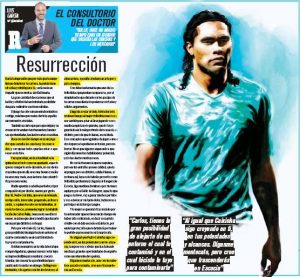 Record then comes up with a two-page article saying the player is getting to the Scottish Premiership, with a well known reputation as a party lover.

Taking claims from the British press, they show that the midfielder’s love for the nightlife is already being commented on by the local papers, even though his quality on the pitch should not be questioned.

Record also uses the opportunity to explain Rangers to a Mexican audience, saying how the club are working to rebuild their reputation, Rangers’ links with religion, 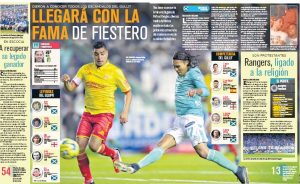 Ibrox legends, and the players who should compete with Gullit for a place in the starting team.

This transfer is huge news in Mexico, which shows the stature of the player. Record is a very widely read daily sport newspaper in the country, and they’ve dedicated three of their pages to the Rangers move.