Home Championship QPR target named as one of the best in his country, West...
SHARE

OFK forward Saman Ghoddos has been named one of the best players in the Allsvenskan by Swedish newspaper Aftonbladet.

The 25 year old has been impressive for his club this season, and this summer was strongly linked with a move to Queens Park Rangers.

Aftonbladet have complied a list of the top fifty players currently in Sweden, and Ghoddos has made the cut after coming in at number nine. Aftonbladet say Ghoddos is a player that never gives up, and that he can make the step up.

Ghoddos was linked with a move to QPR in the last window after the Championship side tabled a bid for the player, whcih was rejected by the Swedish side.

At the time the OFK hierarchy said if the right bid came in for the forward they would have considered selling him, but QPR didn’t come back in with an improved offer. 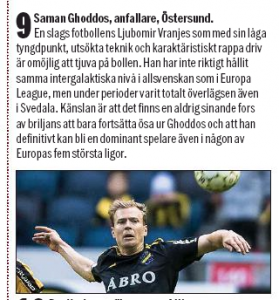 If QPR are to revive their interest in Ghoddos in January then it’s likely they’ll face competition to sign the him, and will need to work to convince the player to come to Loftus Road.

Ghoddos recently spoke about his dream of playing in either Germany or Spain, rather than moving to England.