Hamburger Abendblatt have this week sent a journalist to Leeds to investigate Pierre-Michel Lasogga’s start at the club.

The trip seems to have been prompted by Lasogga’s goal against Bristol City, something which suggested he may actually be on the cusp of returning to reasonable form, rather than his earlier goals being something of a fluke.

Increasingly, Lasogga’s success in England is being taken seriously.

To set the scene, Hamburger Abendblatt describe their arrival at Elland Road: ‘You have to look a bit to discover Pierre-Michel Lasogga. The stadium of Leeds United at Elland Road is located in the south-west of the city, framed by a motorway, a car park and a street with a newspaper kiosk, a sandwich bar, a fish-and-chip shop and a pub. The dominant sound is the noise of cars, it smells of frying oil and chips.’

It’s clear this isn’t going to be a tourism feature.

The picture the Hamburg broadsheet wish to paint of Lasogga at Leeds United isn’t abundantly clear, but it’s easy, reading their words, to have the suspicion they didn’t set out to write a glowing reference of the striker and his new club.

‘The fanshop next to the main stand is already in Christmas mood. In the windows are Leeds United candles, Christmas tree balls, red hats and much more. Most striking however are the very beautiful white-gold jerseys of the club. Shirts with the number “9” and the print “Lasogga” are not to be seen. He is only found when the search has almost been abandoned. In a stand next to the sales street, there are photos in the postcard format of the current players of the club, which can be bought for £2.50 apiece. There are also Lasogga photos offered. He is photographed obliquely from behind, his face is visible from the side.’

If Hamburger Abendblatt are trying to suggest Lasogga isn’t really a big deal at Leeds, that he’s somehow a peripheral figure, they probably couldn’t be more wrong.

The German was recently named Leeds United Player of the Month, getting more than 60% of the votes, and the Hamburg press know this… they reported on it.

But still they carry on ‘Somehow it’s odd that the club, which wants to go from the Championship into the Premier League, hide the HSV loanee, who has played since September in the white and golden jersey, because the cooperation between Leeds and Lasogga is very promising.’

Odd is probably the correct word, but not for Lasogga’s current standing at Leeds United, more for the impression which is being given to fans in Hamburg.

The real reason for the negativity may be Leeds United’s refusal to grant Hamburger Abendblatt a Lasogga interview.

‘Speaking with Lasogga is not possible for journalists from Germany, at least at the moment. Interview requests are rejected by the press department of the club, who point out that a conversation could be possible in the foreseeable future. That does not mean anything. The UK’s professional staff have minimised the media work of their employees. Its own channels are operated. In Lasogga’s case, it is understandable that he should first play and find himself before he speaks.’

After all that strangeness, the Hamburg newspaper do point out that Lasogga appears happy, and that he has a chance to revive his career.

But after some light being shone on the situation, and Leeds, it’s replaced by another cloud of darkness.

‘From Elland Road a road leads up a hill, through a residential area with nice, two-storey brick houses, all equipped with alarm systems. After about five minutes you reach a pub called Old White Hart. On the walls are framed and signed photographs of Leeds legends Allan Clarke and Norman Hunter. At the counter stand Jamie, 28 years old, and Danny, 30 years old. They’d never heard of Lasogga before he came to Leeds, but that doesn’t mean anything.

“We usually get unknown players. Those who have already achieved a lot don’t come to us,” they say. Their first impression of the loan is good. Lasogga has a good position to make a name for himself at United. “He is tall and physically strong, that fits well here… a good second league player.”‘ 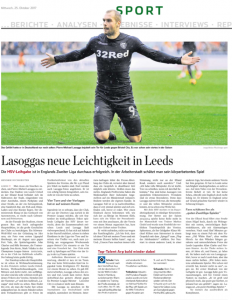 There’s clearly a certain German uneasiness about the Lasogga loan to Leeds: Have HSV made a terrible mistake?

Whilst Hamburger Abendblatt don’t address that question, they seem to want to paint a picture of Lasogga being at provincial club in England’s gritty and poor North, and of the unknown striker not yet being fully accepted.

There’s no mention of ‘new’ Leeds, the great city centre, regeneration. Stating the houses are ‘all equipped with alarm systems’ is only done to convey one thing to the reader, and it’s not that Leeds is a nice place.

Maybe Leeds United should hold off a little longer on granting that Lasogga interview, or have the condition it takes place somewhere the writer can’t then use to insinuate Leeds is some post Victorian backwater.