Claudio Bravo is everywhere in the Chilean sport media at the moment. The big story has been about his refusal to join up with the national squad, angry they wouldn’t take on the goalkeeping coach of his choosing.

It’s turned into something of a soap opera, and the Manchester City player isn’t coming out of it looking great, but today there’s a different Bravo story in Chile.

La Cuarta newspaper have an article on Friday reading ‘PSG have Claudio Bravo in their sights’, and it seems the whole story has come from a source close to the player.

Despite publicly insisting he’ll be staying at Manchester City, La Cuarta say that privately it’s clear Bravo would be tempted should a big club come in for him.

A source close to the player is quoted as saying: “If Bravo leaves England, he would go to a club as important as City, with pretensions to achieve titles. In that sense, the PSG option attracts him a lot, because it’s a great project in that institution. They’ve been following him for some time and in the past there were some approaches to have him.” 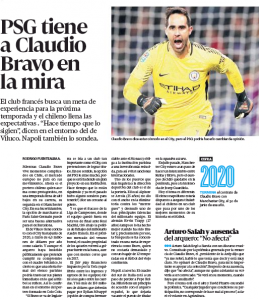 It’s claimed PSG aren’t convinced with Alphonse Areola or Kevin Trapp, and would see Bravo as a relatively low cost signing, allowing them to spend more elsewhere and have no FFP worries.

Napoli are also said to be interested in Bravo and it’s claimed there was nearly a swap deal with Manchester City last summer which would have seen Pepe Reina arrive at the Etihad.

With Reina leaving Naples in the summer, Bravo would have the opportunity to be first choice at the club.

This all sounds like Bravo PR at a time when he needs it in Chile.