We all know there are some rumours which rebound between the Portuguese and English media, with each outlet bringing their point of view on the story.

Following claims from Lisbon this week saying Wolverhampton Wanderers are interested in signing João Palhinha from Sporting, reports from England agreed with it, saying the Molineux side would like to spend €25m on the transfer.

Now it’s time for the Portuguese media to cover those reports, and as O Jogo writes about the situation today, they say it will take a little more to sign Palhinha this summer.

Pointing out the midfielder is protected by a release clause worth €60m, the Portuguese newspaper claims Sporting set the amount of €30m as a ‘first bar’ to negotiate. 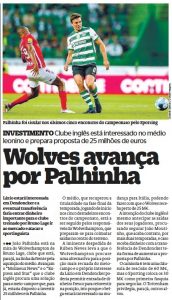 But it turns out that O Jogo brings some good news for Wolves as well. Even though Bruno Lage’s side were reported to be along with Tottenham in this race for Palhinha, the newspaper points out that Spurs are actually more focused on other targets they have for the summer.

So if the Molineux side move quickly and with a few million more, perhaps they do have a big chance of landing the midfielder early in the summer, with no competition to fight.