Since their last Champions League success in 2015, Barcelona have been eliminated in the quarterfinals at the hands of Atletico Madrid, Juventus and AS Roma.

The La Liga winners will now face Manchester United in the last eight of Europe’s elite club competition and have never won such a match at Old Trafford.

A ‘confidencial’ report in Tuesday’s edition of Sport reads ‘The slogan: ready to suffer’ and they cite Barcelona’s recent failures to make it through this round.

Having yet to register a win at the Theatre of Dreams should be sufficient for everyone to be on alert when they face Manchester United.

Following their victory over Atletico Madrid, the league seems more or less sealed and Ernesto Valverde’s side can now solely focus on the European competition.

The Catalan media are of the belief that Ole Gunnar Solskjaer is likely to field Romelu Lukaku and Marcus Rashford against the Spanish champions.

Sport warns the presence of the England international is ‘much more worrying’ for the players and above all, their coaching staff too.

Even though the former Everton striker is the Red Devils’ leading scorer, it’s the 21-year-old who has the most respect from United’s next opposition.

Lukaku is a tall and a strong player and the Blaugrana defenders are capable of stopping him because his game is ‘more predictable’. 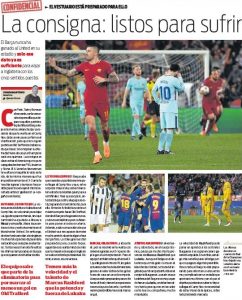 Rashford, on the other hand, is faster than the Belgian and his pace can embarrass the Barcelona defenders if he manages to beat them.

Sport explains how Barca see Rashford and not Lukaku as a major threat ahead of the first leg tie between the two clubs on Wednesday.

It was Lukaku’s brace and Rashford’s late penalty against Paris Saint-Germain at the Parc des Princes which helped United progress.