Chelsea are the subject of the headline in an article from Sport on the future of Ronald Araujo.

The 22-year-old is now a firm member of Barcelona’s first team, and that’s something which started under Ronald Koeman and has continued under the club’s latest manager, Blaugrana legend Xavi Hernandez.

Sport report the situation around the player’s future is ‘especially worrying’ right now, and that’s for a couple of reasons. The defender has a contract lasting until June 2023, and renewal talks haven’t been going well, with Araujo’s representatives not feeling the Barca offers match the player’s status within the squad.

On top of that, there’s interest from multiple Premier League club’s, and the article’s headline reads: ‘Chelsea goes for Araujo’.

According to the claims, Thomas Tuchel’s are in contact for the signing, which would be for the summer window, and they have a ‘powerful offer’ for the player to be Antonio Rudiger’s replacement at Stamford Bridge. 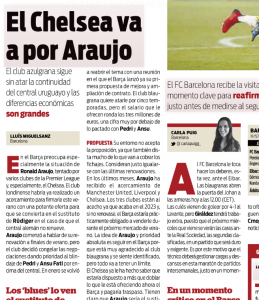 The Blues have ‘already made an approach’ and have made it known they are willing to offer more than double what is currently on the table from Barcelona.

Sport say Premier League clubs, with Liverpool and Man United also linked, feel the Catalan side would be ‘practically obliged’ to sell Araujo next summer if they can’t secure a renewal before then.