Home Premier League Arsenal Arsenal interest in signing has been ‘reactivated’ – Gunners could be ‘breaking...
SHARE

Arsenal were keen on signing Dušan Vlahović in January and even submitted an offer to Fiorentina to acquire his services. However, the Serbia international refused to join the north London club and is now expected to make a switch to Juventus.

Vlahović’s rejection has forced the Gunners to look elsewhere and they have identified Raúl de Tomás as a target. On Monday, AS reported the Espanyol star has the ‘complete liking’ of Mikel Arteta.

Mundo Deportivo now explain the possibility of the striker leaving the La Liga side in the January window ‘jumped’ on Monday, when the Emirates club’s ‘old interest’ in the 27-year-old was ‘reactivated’.

The Spain international has a €70m release clause and the newspaper states this figure will not be a problem for the Premier League side to match.

If Arsenal were to trigger his clause, De Tomás will be the most expensive sale in the club’s history and will also help Espanyol improve their finances. 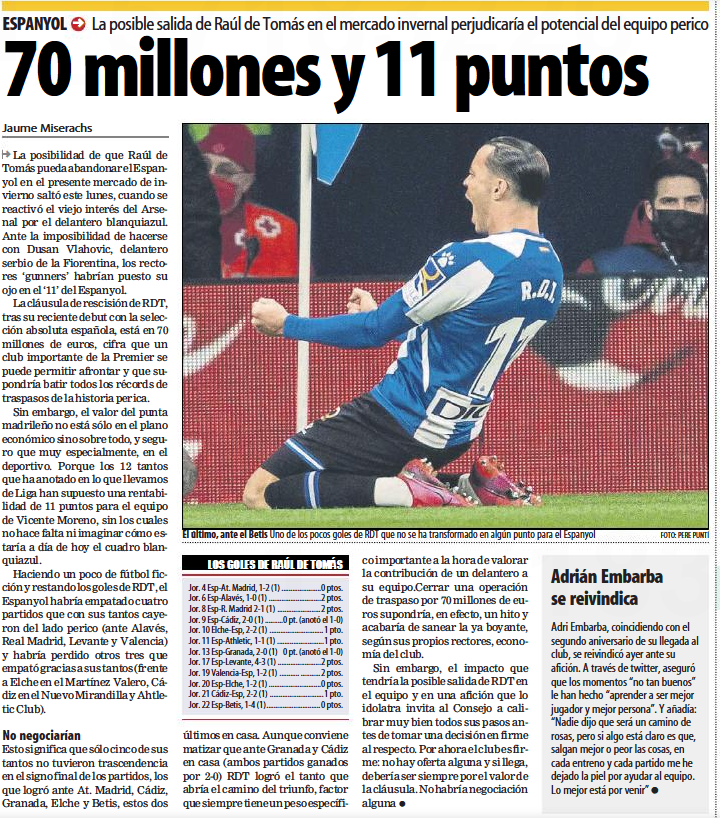 He has 12 goals and two assists in 21 league matches this season and Mundo points out how the frontman’s goals have been vital for Espanyol this season.

The report states the impact his exit would have on the Spanish club must be carefully evaluated before considering his sale this month.

For now, Espanyol are ‘firm’. They have not received an offer for De Tomás, and to let him leave, his suitors must pay the €70m clause mentioned in the contract. ‘There will be no negotiation’.

Arsenal’s move must be ‘breaking all transfer records’ for Espanyol.

With the Spaniard liked by Arteta and Arsenal reactivating their old interest, Espanyol have told the Gunners the conditions to carry out De Tomás’ signing in the final days of the mid-season window.