In only one paragraph, the outlet writes that the London side are willing to get the player on a loan deal from Benfica in the January window.

The Eagles are very interested in offloading him as soon as possible, as Taarabt isn’t even being considered to play for the reserve squad.

The former QPR midfielder has a contract with the Lisbon side running until 2020 and is an expensive athlete with a salary of €2.3m per season. 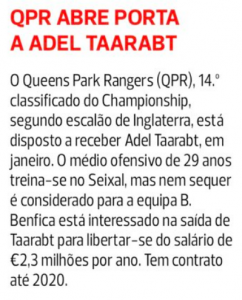 Taarabt’s possible return to the Championship was reported by Portuguese newspaper Record earlier this week, who claimed that some clubs from the English second tier would be interested in him.

Since then, the inevitable QPR claims have emerged in the English media.

That’s why we’re not 100% sure that A Bola’s story is exclusive, as despite not crediting any other outlet, they don’t claim the information to be their own either.