Former Queens Park Rangers midfielder Adel Taarabt could be soon returning to the Championship, according to claims from Portugal.

Portuguese newspaper Record reports that some clubs from England’s second tier are interested in the 29-year-old, who has a contract with Benfica until 2020.

Taarabt doesn’t have one single appearance this season, not even for the reserve squad, where he’s been moved after not impressing for the Lisbon side.

That’s why Benfica plan to offload him in the January market. A loan is always an option, although the preference would be to get a permanent deal. 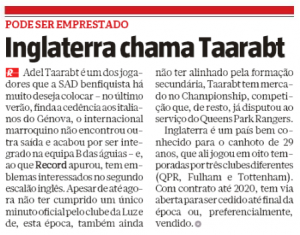 Taarabt moved from QPR to Benfica on a free transfer in 2015, but hasn’t made a single appearance for the Portuguese giants since then.

He had a loan spell at Genoa for the second part of last season, but despite his 29 appearances, he had a couple of injuries and couldn’t convince the Italian side to make a permanent move for him.

Now which are Championship sides interested in him? That’s something we expect Record to reveal soon.

Given his problems at both QPR and Benfica, it’s a wonder Taarabt still has a market. But he’s a very talented footballer and there’s always that temptation of taking a gamble that he might get back to his best.