The Portuguese media love covering Wolves. They take some pride in the success story at the club and feel it has Portuguese influence in all areas.

Not only are there several Portuguese players there, including the much-loved-in-Portugal Ruben Neves, but there’s also Nuno Espirito Santo and of course the Jorge Mendes connection.

Last summer it was reported in Portugal that Diogo Gonçalves moving to Wolves was pretty much a sure thing, with the Championship club said to be ‘waiting’ for the player to arrive.

He of course didn’t, and then when Leeds United owner Andrea Radrizzani suggested his club could 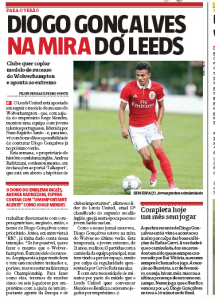 emulate Wolves’ transfer plans, it didn’t take long for Gonçalves to be sent to Elland Road.

On March 17th it was reported by Record that Gonçalves is a ‘priority’ signing for Leeds United, with Radrizzani’s words used to back that up.

Reliability is often in the eye of the beholder but it felt like Record had listened to Radrizzani and thought ‘Ah, Gonçalves to Leeds, here we go’.

This week, in all innocence, The 72 website suggested Gonçalves is a player Wolves should go for this summer. 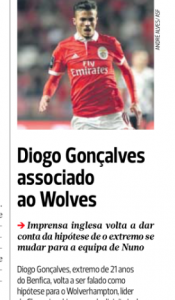 A day later Portuguese newspaper A Bola has an article saying he’s on the club’s list according to the ‘English press’.

Gonçalves is a very talented youngster, not really getting a look-in at Benfica, and the country’s media seem incredibly keen for him to land in the Championship.

Or at least for there to be some kind of battle to sign him.