Amid talk of Max Allegri or Luis Enrique potentially succeeding Antonio Conte at Chelsea, a third name, according to France Football, is on the Blues’ list.

The French magazine have a ‘managerial’ special out this week, as they look at all the different destinations for some of the most wanted managers around Europe, which includes Laurent Blanc.

Yet to accept a new job, and it isn’t through a lack of offers, since leaving Paris Saint-Germain two years ago, the 52-year-old could return to management in the summer, and Chelsea is one of the likeliest landing spots for him.

France Football explain Blanc would only leave the golfing greens for an ‘ambitious’ project, which Roman Abramovich could provide. 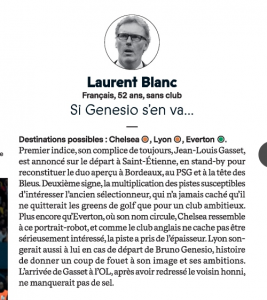 Furthermore, Chelsea ‘aren’t hiding their interest’ in the former Manchester United defender, as he becomes an increasingly viable option as time goes by.

To us, he seems like the Stamford Bridge club’s plan C after Allegri and Enrique, and, like the Spaniard, he wouldn’t require any compensation since he’s currently without a club.