Championship side West Bromwich Albion were interested in signing Sporting striker Bas Dost this summer, according to reports from the Portuguese media today.

Newspaper Record says the Baggies have made an approach to get the 30-year-old while the clubs were negotiating the loan of Matheus Pereira.

But the chances of a deal soon collapsed. First because Bas Dost never showed any interest in joining West Brom, which was then followed by the West Midlands side finding out his large demands if he were to make the move.

Sporting are said to be keen on selling the striker, but the only offer they had was a €20m bid from Mexican side Tigres. Lazio and a club from China are also said to be interested. 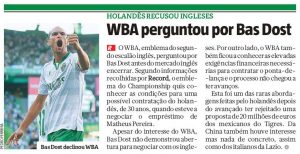 Bas Dost has scored 94 goals in his past three seasons, and that’s why Sporting continue to believe he’s worth over €20m.

Perhaps if the Baggies get promoted to the Premier League this season, they can try to convince him again next summer.