Home Championship From Portugal: Vukcevic to Nottingham Forest is back, an ‘hypothesis’, €5-7.5m
SHARE

Nottingham Forest are back being linked with the Braga midfielder Nikola Vukcevic on Monday.

Although these rumours had gone silent for over a month, newspaper Record brings the story back today, saying the Championship side are one of the options the player has in the summer window.

The article claims that Braga are looking to make €15m from sales this window, and there are two specific players who could help them get this money: Nikola Vukcevic and Ahmed Hassan.

Regarding the Serbian midfielder, there are two clubs who could go for him: Nottingham Forest and Levante. 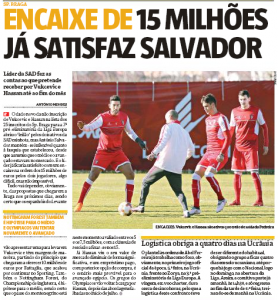 As Levante recently made a €10m bid for Rodrigo Battaglia from Sporting, Record believes they have the money to take Vukcevic.

The price for the Braga player would be between €5m and €7.5m. Not even half of his €15m release clause.

Nottingham Forest are said to be an ‘hypothesis’, but Record doesn’t give any details or explain if a bid from the Championship side is expected.

As previous reports claimed that Vukcevic’s price would be over €10m, maybe this is a good new chance to get him.