A couple of days ago, the English media reported that Wolverhampton Wanderers would be interested in signing João Félix from Benfica.

Without pointing the price out as a problem, it’s only been claimed that Nuno Espírito Santo’s side would have to convince the wonderkid that moving to Molineux would be the right step for his career.

Well, things aren’t as simple as that, and that’s what newspaper Correio da Manhã explains in a short story today.

As the outlet covers the claims about Wolves interest, they make it pretty clear the price could be a issue for the Premier League side. 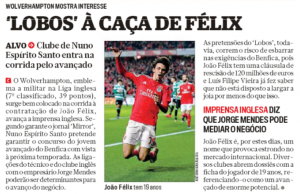 Correio da Manhã writes that Wolves may ‘bump’ into Benfica’s demands, which are of €120m. That’s João Félix’ release clause, and president Luís Felipe Vieira has made it clear he’s not letting the 19-year-old go for less than that.

Even if he went back on his word, João Félix’s form suggests there wouldn’t be a big discount.

There’s also the fact that many other clubs should soon go for the midfielder, who has seven goals and four assists in 13 league appearances this season.